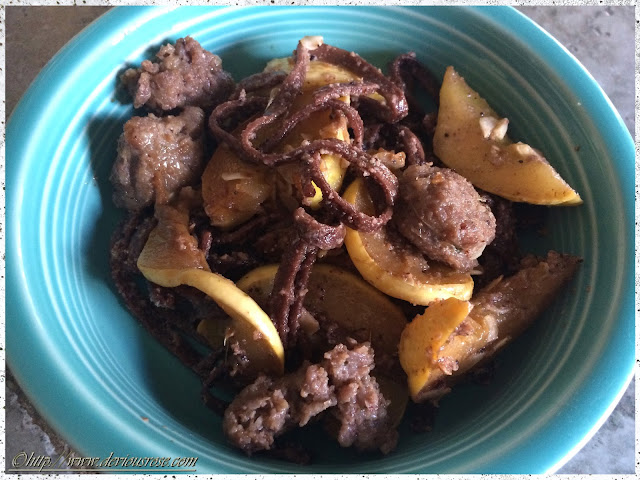 A dish summery in appearance, with autumn flavours

Sometimes, when you go to the Farmer’s Market, an ethnic grocery store, or an organic store, you buy something really unusual, whether because it interested you, morbid curiosity, or just ‘cause. This post is borne of such a buy: chocolate linguine from a pasta stall I’ve purchased before. I have been interested in the chocolate pasta since I “discovered” a woman selling Pappardelle’s pasta back in March. I bought this chocolate linguini two Sundays ago, but since March I have purchased portobello mushroom pasta, four peppercorn, sundried tomato linguini, and lemon parsley. None of these have disappointed me, and in all of these pastas, the flavour just POPS. I mean, that mushroom pasta tasted like pure mushrooms, and I, a person who is not fond of plain pasta, wanted to eat it all by itself! 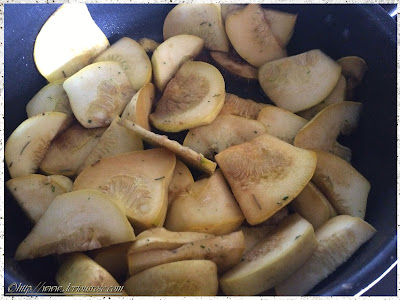 Sliced squash.  Sorry for no whole photo- but just make it a mission to find an unusual squash!

I took all the photos on my phone (sorry!) and did not photograph the squash before slicing.  So, for this recipe, make it your mission to find unusual squash and pasta, or use it as a starting point for your own ideas!  Chocolate in food wasn't that strange to me, being Mexican, and being from a family that loves cooking, I know how to handle a challenge.  For this meal, I was unsure how the pasta would taste, but I knew that squash would go well whether I went for savoury, sweet, or any other flavour, and the weird squash pile in the farmer's market caught my eye.  I cooked the pasta first to decide how I would make it, and decided that the pure cacao flavour would be muted or even killed if I made the creamy sauce I had been planning on.  I still wanted simple, so I went for a fresh little pesto with squash, and some pecans to complement the pasta. I left the pesto more textured than most I've seen, to keep some of the original flavour of the components. 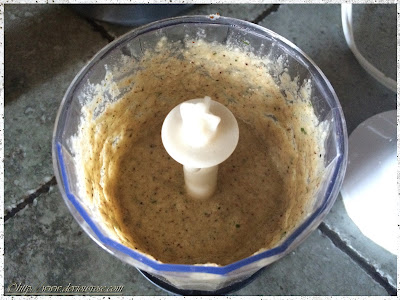 Don't blend the pesto to a perfect smoothness

I would totally buy this pasta and this squash again.  This dish would be a perfect side to some pork roasted with white wine vinegar, or other simply cooked but still decadent fare.  I would also like to taste it with slices of brie, added in the last 5 minutes of cooking.  I thought of adding parmesan, but the strong flavour would overtake the subtleties of the squash and chocolate.  My short time in France last year did teach me that- pungent and flavourful is not the only way!  "Simple" flavours go a long way indeed. 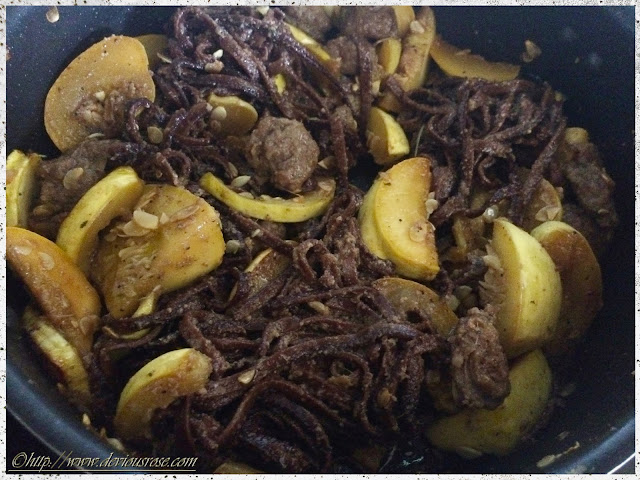 3/4 pounds/340 grams chocolate linguine pasta*, al dente
1 tbspn butter
1 garlice clove, minced
2 medium squash, sliced thickly, of any variety! I didn’t get the name of the squash I used, I just picked two because they looked interesting. You could use 1 butternut squash or a medium-sized yellow pumpkin if your options are limited.
sprinkle of dried rosemary
1 tbspn balsamic vinegar
3 large bratwurst sausages, sliced
pepper to taste

*I got mine from the farmer’s market. The company was Pappardelle’s and they are available at some localities throughout the USA, usually at farmer’s markets and local festivals.

In a large pan, melt butter to just past melted, add in the minced garlic, and cook on medium until golden. Add in sliced squash, sprinkle with rosemary, and cook on medium for about 4 minutes. After 4 minutes, stir and add in the balsamic vinegar, followed immediately by the sliced sausage. Sprinkle with pepper and salt, stir, and allow to cook covered on medium until sausage is just done, stirring occasionally. Uncover and raise heat slightly, and cook until squash begins to blacken.

While the squash and sausage are cooking, place all ingredients for the pesto in a food processor and blend until mostly smooth, but still a little textured. Heat some olive oil in a pan, and once hot, pour the pesto over so that it sizzles. Cook the pesto on medium heat until it changes colour, adding splashes of olive oil if it starts to get too dry. Add pasta and stir well, until evenly coated. Cook 5 minutes on medium-high heat, uncovered and stirring often.

Serve pasta and squash-sausage dish either apart with a salad or yummy bread, or mix the squash and sausage with the pasta and serve together as a side to a main dish.