It's not even funny.  For whatever reason, I keep being really inspired in my art by the music of Eluveitie.  Even the band that three of the founding members formed has inspired me to do a piece of artwork so similar to their debut album promo images that I called it fanart: 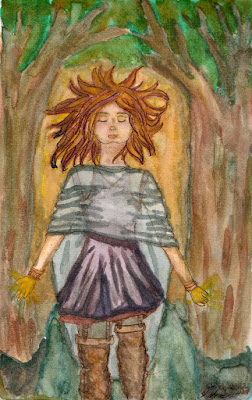 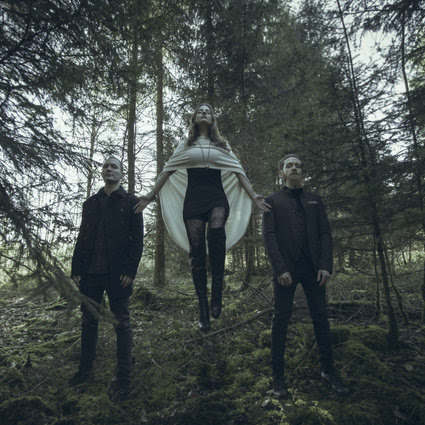 Left: My drawing.  Right: The promo images for Cellar Darling's This is the Sound album.

Quick process of that above piece.  It's not really that good, overall, but I'm super proud of it because it was my first full watercolour on actual watercolour paper in a long time, and I got to see all my improvement in one go: 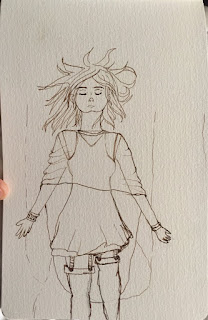 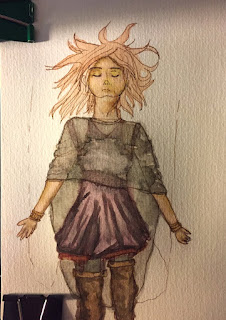 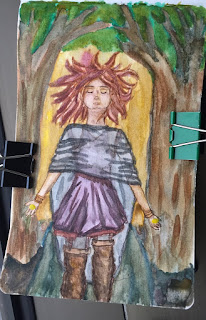 
It was also my first full piece with my new, proper watercolours (Sennelier), and they were so vibrant and easy to work with.  The boots came out pretty good, and the poncho overlaying the dress did as well, particularly the transparent part! So I'm quite happy with it.  I would like to redo this someday in a less drawing-between-conference-breaks-in-my-hotel-room pressure, with figures representing Ivo and Merlin (the other Cellar Darling members) as well.  I love all the songs on that album, but I'm posting this particular one as indicative of my overall inspiration because it's the one that repeats the album title in the lyrics.

Well, that's the main one.  There's also a concept sketch and a watercolour doodle I did to practice folds in clothing and facial hair (horribly failed at the latter).  Both art pieces are inspired by album artwork, promo images, and overall feel of the album, but not really faithful presentations of the albums.  Thus I'm not calling them fanart. 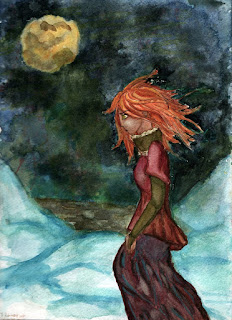 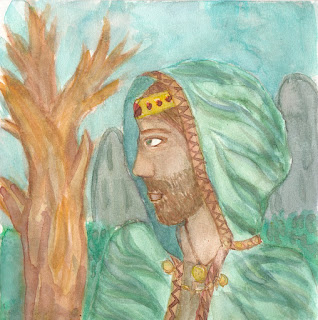 I also did a knit stitch based on a tutorial on how to encode words into knitted lace.  I didn't do anything fancy.  Rather than convert the word "Helvetios" into any number system, I just did a straightforward cipher and converted each letter in the word into its number in the alphabet, and did yarn overs according to the digits.  For zeroes, I just skipped a space whenever I had a 0 digit and began counting again- like 0 was a skip or a reset counter.  Because lazy.  That results in this loveliness: 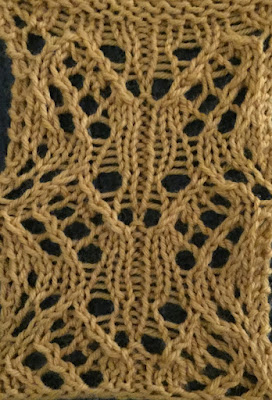 I encoded the word "Helvetios" into this lace stitch, naming it after Eluveitie's album Helvetios, title song posted next to the stitch.

Sloppily blocked, hence weird cropping on a phone snapshot, but I just wanted to visualize the stitch.  I did have to play around with decrease type and placement, but not as much as I thought I would have had to.  I still need to work out what I want to use the stitch in - thinking a bottom-up crop top.  I love how it came out!  Captures what I get out of this band's music.  Which is not for everyone, but hey...I love it, especially with all the added layers of old myth, spirituality, and history, in addition to great blends of folk and metal.
Posted by Krystalle at 10:25:00 AM