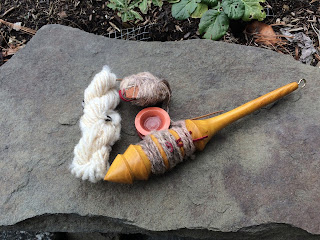 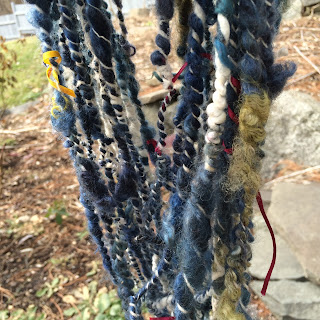 Here's an evolution of sorts- from plain, rustic tools to spin an even, practical yarn to a wheelspun, still practical, but principally aesthetic yarn.  Yarn on left spun for S3 Module 1: Neolithic.

I am alpha testing- yes, ALPHA- testing something for Fibery Goodness!  I don't think beta testing begins for another few weeks- test for FiberyGoodness's new project/feature concept in testing: Evolution.  It's on their site, with the blurb that asked for alpha testers.  I believe they already set up a beta testing list as well, so any more adds to the waiting list will probably not receive anything until the project is officially rolled out. So far, us alpha testers have been split into groups and given a project theme and a finished item, and the rest is ours to be free with- it's up to the people in the group.  Thus far, it's been challenging, but it JUST got really fun.  I mean fun.  I haven't felt this excited about art since Ravelry sent me my acceptance email during their beta stage.  My group is Gondor- we're calling ourselves Team Gondor.  Or, we have a few times.  They (Arlene and Suzy) split the alpha testers into groups named after Tolkien regions, yes.  AWESOME, right?  I'm a Hobbit at heart myself, but that's not the point here!  I said it just got really fun because we just had our first group meeting through video chat. 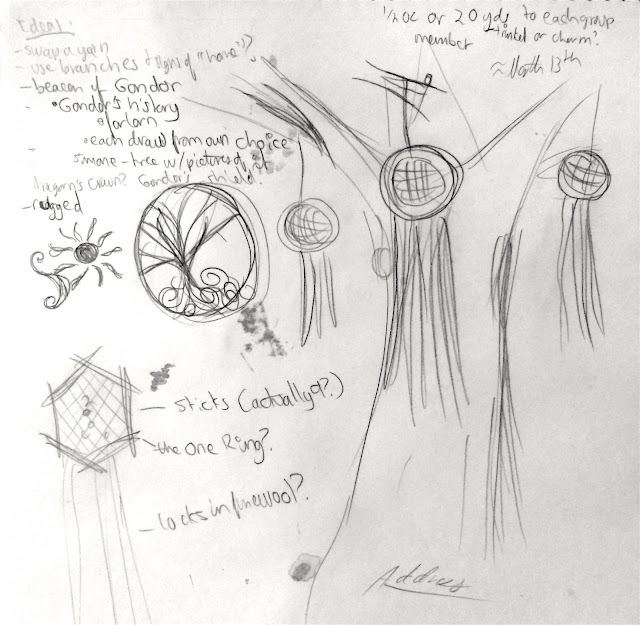 Brainstorming sketches I took during the meeting.  All built around the Evolution project theme, which I won't give out yet.
My group is filled with fabulous, creative people, and we've got ideas for a fiber/yarn/materials swap to get on with our projects.  For now, the plan is centered on Gondor's history and taking that into the fiber arts as we see fit, with materials from our other members, and fitting that into the framework of the Tree of Gondor.  That may change of course.  It is, after all, named "Evolution" for a reason.  In less than an hour, I was bombarded with inspirations and ideas for my art that I became excited for the project itself, instead of just excited to alpha test.  We came up with it pretty quickly after meeting each other on video chat after Facebook chatting for a while.  It was fun and not at all daunting!  Before getting onto Fibery Goodness and spinning, and before having to present and give talks at conferences for undergrad, I likely would never have volunteered to test something that required me to meet strangers through video chat.  But Fibery Goodness spin-ins (group video chats where you art while you chat) and the like have returned the sense of community that is so elusive in art for me.  Before setting up the chat, we did have some hurdles- Pinterest didn't like our group board for sharing our inspirations, the Fibery Goodness forum kept confusing us (okay me), and Google Hangouts wasn't cooperating.   But we had our meeting, and we all came up with very good ideas.  Part of it was our own independent idea, part of it was the person had likely spent time thinking it up before our meeting.  But we settled on a couple of concepts involving Lord of the Rings imagery, where our group project will be individual and them assembled via photography.

And these are three of my musical inspirations for this project.  These are mine, not the group's.  My personal playlist for the project is just that- personal.

If you're eager to learn more about Fibery Goodness and the Evolution project, it may be hard for now because as I said, it's in the alpha testing stage.  We are the lab rats for the lab rats, but it's going to be cool.  Roller coasters are fun, after all.  I do plan to blog more about my experience with this as it goes on.  I have asked Suzy (one of the site founders) if it is fine for me to blog about it, and she said yes.  I'll post enough details for it to be informative without giving Evolution away!  I did make a playlist for myself, but I'll link it here anyway.  If it has a video, that means that I find the song both musically and visually inspiring.  If it's just a lyrics video, then it's just the song's music and lyrics I'm using to work towards the theme.  The playlist is here, and is the same one linked in the caption above.  Inspirations here of course, may not make it into this particular final project, but I already have knitted and crocheted interpretations for most of these sources in my head.

If you're not familiar with Fibery Goodness, it is a site owned by Suzy Brown aka Wool Wench and Arlene Thayer of Spin Artiste magazine, built on a concept of bringing fiber artists together to explore and innovate the waters of the fiber arts, mainly through courses.  Quite robust courses, I might add.  Their courses have syllabi and homework builds, along with forums for each class, not unlike what I got in university until just last year!  And no, I am not being paid or reimbursed for this blog post.  Alpha testing is purely voluntary as well, so if I hated it I would be honest and provide constructive feedback to Fibery Goodness, without raving about how exciting the project is.