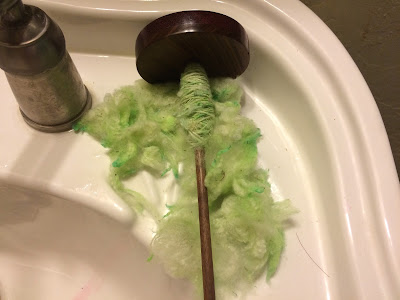 Spun up on my Greensleeves Damsel Monique spindle to take the thicker, textured single

So, I accidentally missed the last Challenge Day of this Tour de Fleece because I wasn't paying too much attention to the schedule other than start and end dates.  This is also the first time I have participated, and I only heard of this a couple months ago since I just got into spinning this January, so I didn't know the structure.  I also actually adhered to the rest day on Tuesday, which was absolutely marvellous for my wrists, which are no longer aching constantly.

Anyway, my original challenge for the Challenge Day was to ply my Suffolk on my new The Dancing Goats supported spindle, which was somewhat cheating because I have plied on my other The Dancing Goats spindle, but it was my Navajo Churro fleece that I blogged about before.  Now that I think about it, it's actually quite fitting that the fleece I bought at the same time as the Navajo Churro also be plied on the same sort of spindle from the same maker. 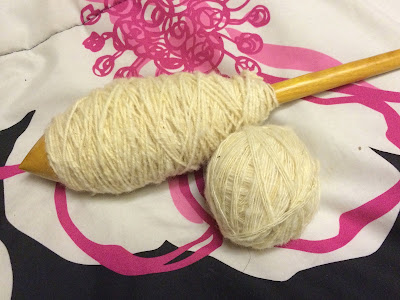 And what a lovely surprise.  I hate plying, especially because my drop spindle gets sooo heavy, and plying Mirkwood was a huge factor in the week of wrist pain, so I had decided then and there that I would ply my next thing on a supported spindle.  But today, the plying was wonderfully painless, my wrists didn't snap or crack or ache at any point, and I was able to just put a notebook on the floor and stretch very little to flick the tip every now and then, wind on when there was enough twist, and repeat.  I want a very bouncy yarn, so I am plying to what looks just a tad bit overplied to me, then winding on.  It is remarkably even, and I can't wait to get to dyeing it. 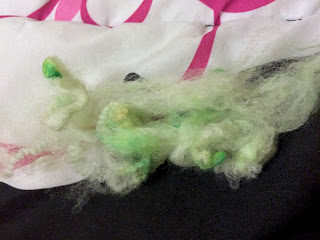 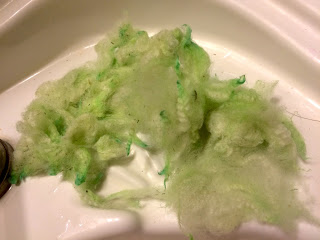 Some of the Rambouillet locks I dyed and spun for this challenge day, from different section of the fleece, and under different light sources to give a good idea of colour variation.

The second challenge I did came to me on the spur of the moment.  I had grabbed a couple handfuls of locks from my mass of Rambouillet fleece, and dyed them with some food colouring and espresso from used coffee beans, using vinegar as a mordant.  I did a cold dye as I usually do, after scouring my fleece to get out ALL the lanolin (I got most of the lanolin out in my initial wash and have been spinning in the grease).  I skimped out on the vinegar soak, leaving it only an hour instead of my usual overnight soak, and then dunked the locks and vinegar in the dye bath and left it outside for 36 hours.  The challenge portion came when I decided today that I was going to tailspin these locks, without further prep.  I love spinning from the lock, but I flick or comb the locks before going at it, unless they are super nice and fluffy already.  I have done a couple locks "proper" tailspun, as I think of it due to Natalie Redding's terminology, in which I just spin from the mass of locks without any prep, but I have done this only 2-4 times.  I did beat the locks before dyeing and after drying to get out as much remaining dust and vegetable matter (VM) as possible, but once that was done I decided, hey, it's Challenge Day, let's do a challenge!  So I did.  I decided to tailspin the locks, sans prep of any kind, and just let the locks be themselves.  Nepps, noily bits, second cuts, clumps, whatever, I let the fiber be itself and got a textured yarn, spun semi-worsted and semi-woolen: occasionally from the fold worsted style, but mostly right from the tail end in a woolen style.  The locks are wonderfully soft now, almost too soft, and I am afraid the finished yarn may bleed, so I will finish it in a proper vinegar bath.  Since I already have a super textured yarn from this, and not the texture I tend to gravitate too, I will I may just ply it with some silk plying thread and/or metallic threads that came with a scrapbox I bought from Namaste Farms.  I do wish I had something like bright blue to put in like thrums in the yarn, but I may get that yet!  I love what I'm getting so far.

And of course, I am still working on my MKAL.  The second clue is out following a slight revamping,  in which approximately 120 more beads that first stated will be needed for a more Corinthian-like column.  It will be lovely, and it's not too late to hop in!  Clue 2 is small to let people catch up, and there is a group for support and sharing progress.